It’s All Done With Magnets

One of our team members recently went to Iceland in search of the Northern Lights, or the Aurora Borealis, the elusive natural phenomenon that takes place in the Arctic regions of the globe.

After nearly forty years manufacturing promotional magnets, we have a serious attraction to them and were very interested to learn about the part magnets play in the Aurora Borealis.

Sadly, due to bad weather, our intrepid traveller wasn’t able to see the lights, nevertheless, she learnt a great deal about them. Over some Icelandic chocolates and hot tea, she told us how it is the light’s unpredictable nature that makes them even more special. Seen by the human eye as bursts of colour dancing through the night sky, the cause of the display is somewhat less magical, but still awe-inspiring.

Although a great deal of research is still being conducted into the Norther Lights, it is known that they occur due to the interaction of  the solar wind – a stream of charged particles escaping the Sun – with the Earth’s magnetic field.

Although we now understand the cause of this mesmerising occurrence, there are many ancient beliefs that were used to explain the appearance of the coloured lights at night. The Inuit, for example, believed the lights to be the spirits of the dead dancing in the sky. The lights were a good omen as it meant the spirits were happy. 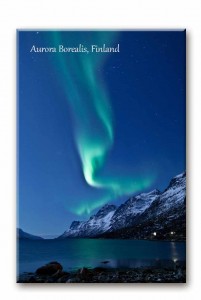 In Norse Mythology Northern Lights were believed to be the reflections of the shields of the Valkyries racing across the sky on their way to their resting place, Valhalla.

So, there you have it. Not only are magnets a great way to promote your brand, they’re responsible for one of the most beautiful natural phenomenons on Earth.

We have a range of standard shape promotional magnets, but we can also produce any shape, any size. Don’t forget that we also make branded photo magnets, the paper wrapped metal based magnets you would see in a souvenir or gift shop.

Contact us today for a free quote and sample!